Choosing Our New Senator, the Voter Guide Tells You Enough

I have no faith in government, but I still vote. I don’t blame you if you don’t, but I don’t want anyone to say: “American democracy would have worked, if only you had done your part.” I’ve voted every election since Reagan defeated Carter. The country went down the toilet anyway. I know that democracy is a sham, but I still play along and hope for the best, mainly, because voting is so easy. It’s like filling out the Publishers Clearing House Sweepstakes form. You know you haven’t already won, but you were bored enough to open the envelope, so now you might as well mail at least part of it back, before you throw the rest away.

This year, we have an open senate seat in California as Senator Barbara Boxer resigns. A whole slew of candidates have declared their intentions to fill that seat. Thirty-five names will appear on the ballot, but even if you don’t follow politics, you have enough information to make a pretty good choice just based on the candidate statements in the voter guide.

First, of the 35 listed candidates, only 21 submitted, and paid for, candidate statements. That’s 14 candidates you can eliminate right off the bat. If you don’t have it together enough to prepare a statement, or don’t have enough cash to buy the single most important campaign ad, you lose. Whoever you are, better luck next time. 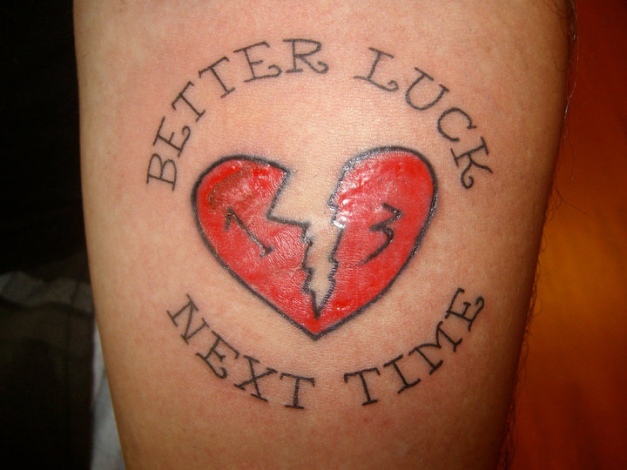 I also eliminated the candidates who paid the fee to have a statement in the voter guide, but then couldn’t be bothered to write one. I couldn’t believe how many candidates did this. Pamela Elizondo, Jerry Laws and Don Grundman manage to distinguish themselves with their ineptness, by wasting money that the fourteen mentioned above, saved. Btw, for all of you candidates: A URL is not a statement. You are not running for senator from cyberspace. If you can’t be bothered to write a statement for the voter guide, there’s no way in hell I’m going to look at your web site. 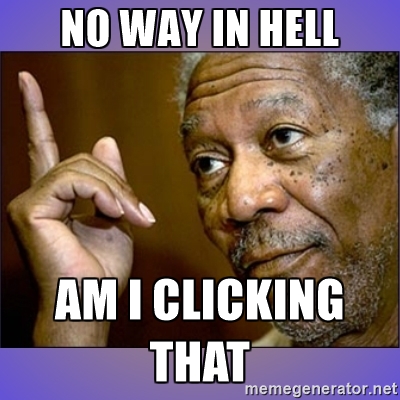 We’ve already eliminated half of the field, but we can winnow it down still further by eliminating the candidates with exceedingly short, cryptic statements. Inscrutability is not a characteristic I look for in a candidate, but if you do, you might like Jason Hanania, who has distilled his position on all of the important issues facing the US today, down to a single binary byte: 01100101. Does that mean anything to anyone? 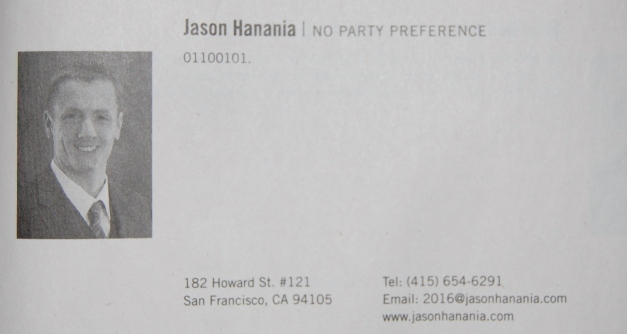 Perhaps you prefer Karen Roseberry, with her inscrutable message: “S.A.V.E. The future.” What does S.A.V.E. Stand for? Some Atheists Value Ethics? Still Against Virtually Everything? Sexually Active Vagina Energy? Well, at the very least, S.A.V.E. must stand for something, and so far, that’s more than we can say for most of the candidates in this race. 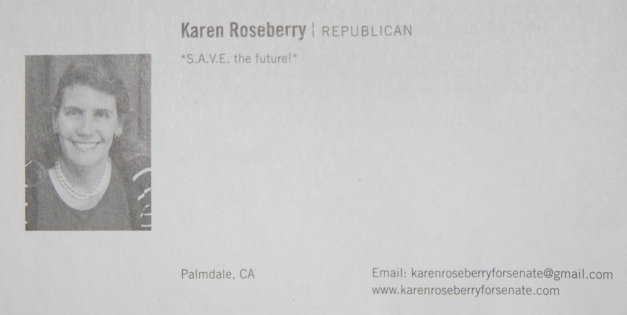 Then we have the ESL candidates. I want my senator to understand what is being said to them, and I want to understand what my senator says to me. Some candidates clearly have difficulty relating to people in Americanized English, and reading their statements gives the strong impression that a great deal of their message has gotten lost in translation. 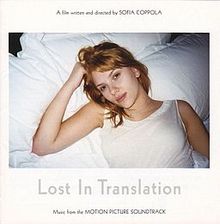 Akinyemi Olabode Agbede, for instance, urges us to: “Rescue America, Rescue America, Rescue America. Let us together rescue America from turning into a third world country. Enough is enough of American deep suffering. People in Washington has collapsed this country. Therefore electing Dr. Akinyemi Agbede as your next United States Senator representing the golden state of California 2016 is the answer in order for our country to be reclaimed back.” 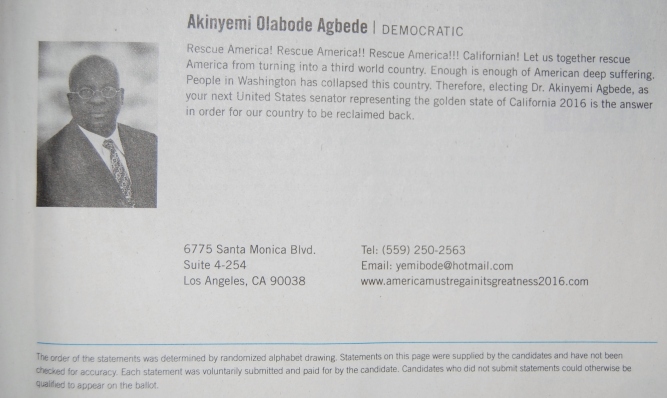 That reads like a Nigerian email scam, doesn’t it? I’m afraid that if I vote for Dr.Akinyemi Agbede, he’ll drain my bank account and encrypt all of the pictures on my computer. I can’t risk it. I’m much more tempted to vote for another ESL candidate: Ling Ling Shi. 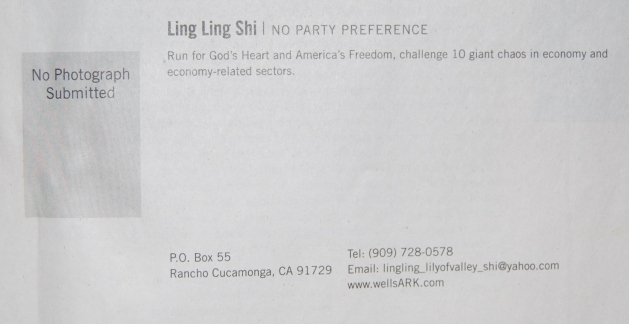 The giant panda? There’s no picture accompanying this candidate’s statement, so I can’t say for sure. I didn’t know a giant panda could run for senate, and I thought Ling Ling was on loan to the Washington DC Zoo from China, but perhaps in the ensuing years she’s become a naturalized US citizen, now based, apparently, in Rancho Cucamonga. 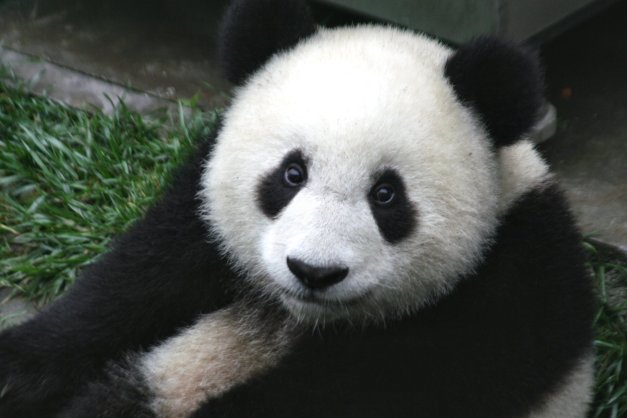 I find Ling Ling’s message quite endearing: “Run for God’s heart and America’s Freedom, challenge 10 giant chaos in economy and economy related sectors.” That’s damn good English, for a panda bear, if you ask me, but not quite what I expect from a US senator. Ling Ling the Panda vs 10 Giant Chaos sounds like the title of a Manga comic book. I can imagine this sweet big-eyed panda bear facing the unbelievably evil forces of 10 Giant Chaos, bravely, resolutely and against all odds, but I can’t imagine Ling Ling the Panda as my senator. 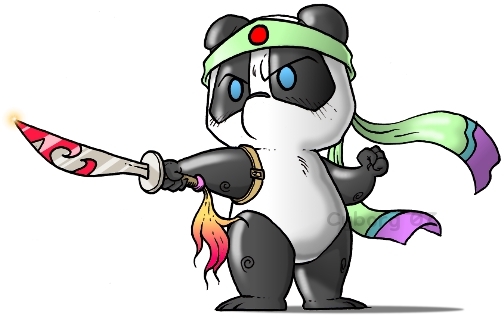 Nor can I imagine voting for President Christina Grappo: “My education & expertise merits this prolific occupation to represent California, as United Senator.” Clearly your education and expertise do not extend to the use of the English language. “I hold a Democratic Party platform with key issues of gun control, human trafficking, balancing the national deficit and foreign policy initiatives.” That’s not a degree, you know. “I am mainstream Facebook in social media!” How about that? Me too! “My core values drive America!” Drive us where, exactly? For President Christina Grappo, I fear that not only is English a second language, but also that reality is a second home.

Now we get to the candidates who appear to have been raised here in the US, by people who spoke English, but for some reason, just never took to it, even as a first language. Paul Merrit’s pidgin English and poor spelling took him off of the increasingly short list of candidates with a realistic chance of earning my vote. 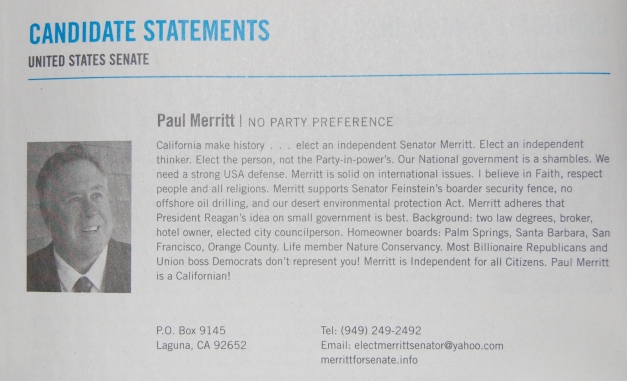 “Merritt adheres that President Reagan’s idea on small government is best.” I think I know what that is supposed to mean, but I expect my senator to say it better than that. Then again, “Merritt supports Senator Feinstein’s boarder security fence…” Boarder? You mean like snow-boarder? I’m not worried about snow-boarders. If he meant “border,” but was too stupid to know better or too careless to proofread, then he’s too stupid and careless to vote for. Bonus: Merritt served on four homeowner’s association boards. This should tell you what kind of idiots make up these homeowner’s associations. 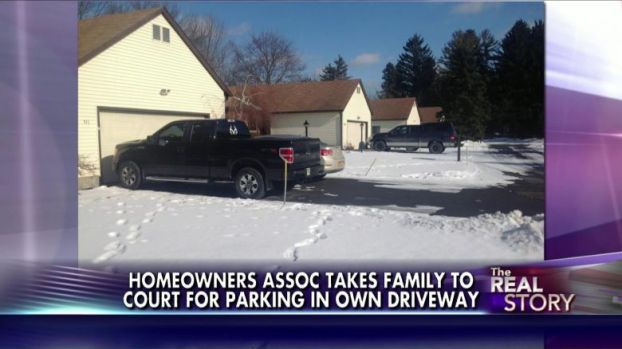 Herbert Peters may know a bit about American History, but he never quite got the hang of English grammar and punctuation. He begins with the sentence fragment “Andrew Jackson Democrat.” followed by “Our first 70 years; our county grew and flourished.” He uses a semi-colon as though he couldn’t decide between a period and a comma, and then cleverly found a key that printed both. What “county” is he talking about? He means “country,” but what he means doesn’t matter because he lacks the means to communicate it.

Where Herbert Peters uses too much punctuation, Jason Kraus doesn’t use nearly enough. His first sentence works for him: “Each election Californians are saddled with the same problems, same issues, and same faces.” But watch what happens next: “Politicians beg for our money making promises that will never be kept.” Why would they beg for our money making promises, if they knew we would never keep them? A single comma would have made that sentence make sense. He continues: “Remove all forms of income tax which will increase employment, ignite our economy, and protect our way of life.” Those sound like the good forms of income tax, if that’s what they do. Don’t they? Again, a comma makes all the difference. 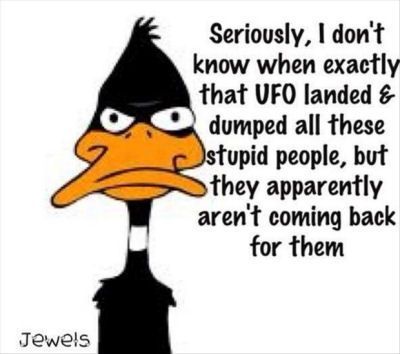 Really, just nine, out of 35, and of those nine, two are just barely high-school level. Both Tom Palzer and Tim Gildersleeve, opted for statements that were only two sentences long. How much can you say in two sentences? Now we’re down to seven. At this point, I don’t care whether I agree with them or not, I’m just glad to read a statement from anyone who seems at least marginally literate. 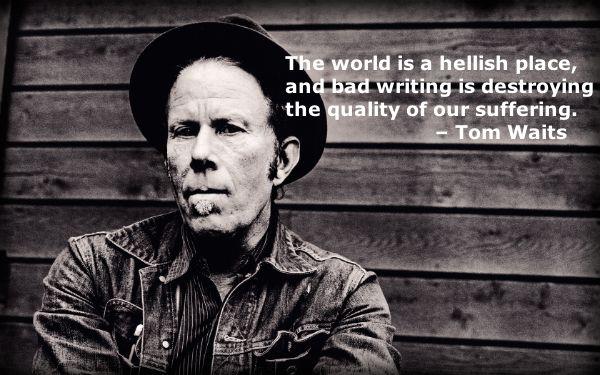 I like Don Krampe. I’d never vote for him in a million years, and he looks like he’s a million years old, but he seems like a nice guy, and at least he knows how to write a statement.  I wouldn’t blame people for voting for Von Hougo. I wouldn’t vote for him myself. I don’t buy his pitch for a new “voter driven platform,” but I’m glad that a youngster like him has the English skills to make his pitch. Duf Sundheim actually seems to have some writing talent. I wouldn’t vote for him for senator, but I could imagine him as a sportswriter. Greg Conlon’s statement reminded me that no amount of English skills can make greed more interesting or attractive. 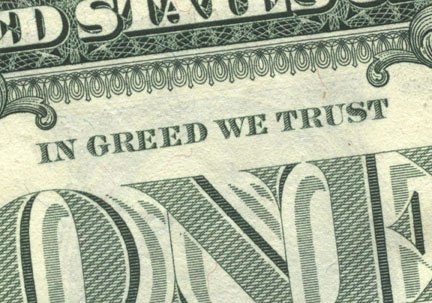 Speaking of interesting and attractive, check out Massie Monroe. She looks great in that turtleneck, and check out that first sentence: “My candidacy represents the United States Constitution, the only contract between the people of America, and America’s government ‘Of the people, By the people, For the people’ to be restored and strengthened in America and extended to the UN as a contract between all people of our world through US leadership and diplomacy.” 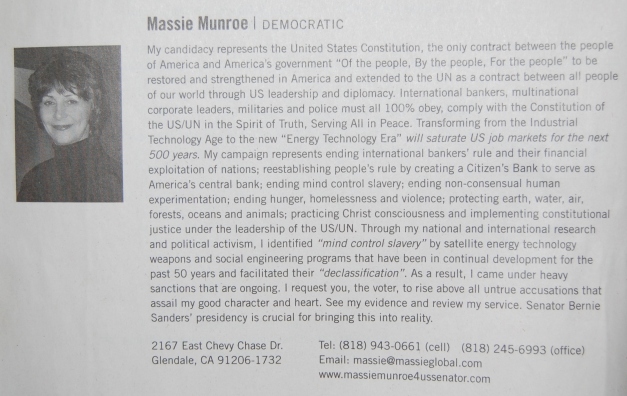 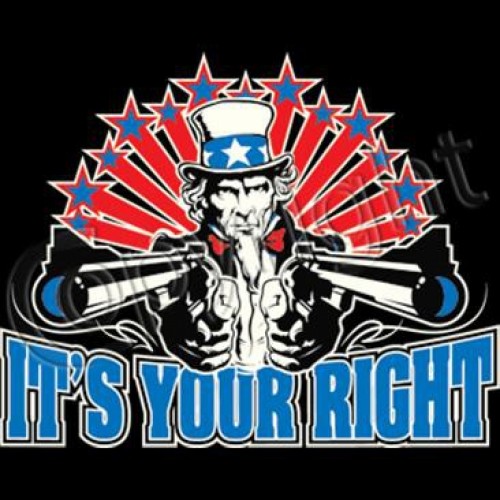 She gets weirder, promising “the new ‘Energy Technology Era will saturate US job markets for the next 500 years.” That’s a long time. Her “campaign represents ending international bankers rule… ending mind control slavery; ending non-consensual human experimentation… practicing Christ consciousness and implementing constitutional justice under the leadership of the US/UN.” As qualifications, she states “Through my national and international research and political activism, I identified ‘mind control slavery’ by satellite energy technology weapons and social engineering programs that have been in continual development for the past 50 years and facilitated their ‘declassification.” I want to believe, Massie, I really do, but I don’t believe I will vote for you. 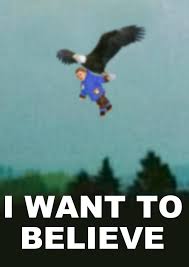 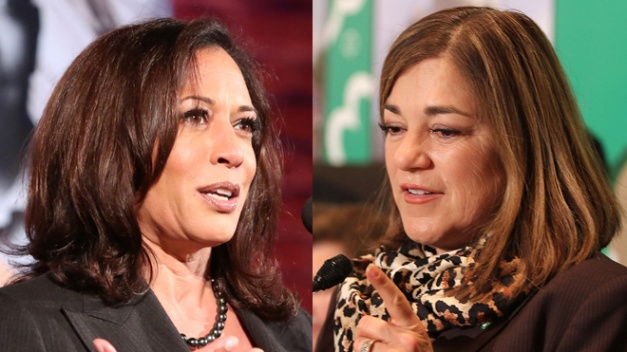 I really liked the angle Loretta took on her statement. She told us what we needed. Then she told us why she has what it takes to be what we need. She writes strong and clear, and ultimately, she stands on her record. I want my senator to know how to write, because if you can’t write well, you probably don’t think well either. Loretta Sanchez can write, and she said enough of the right things. Outstanding! 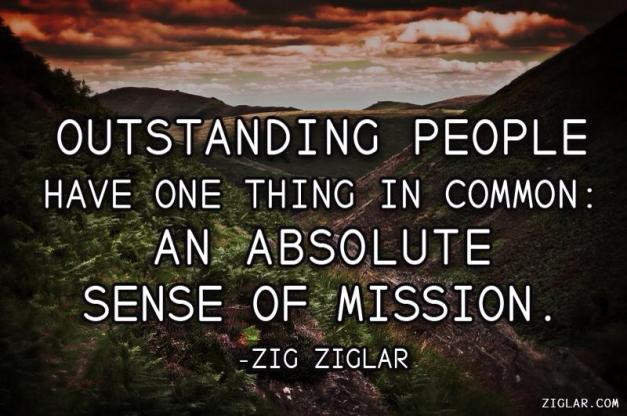 Kamala Harris blows it on the first sentence: “My name is Kamala Harris.” We know that. I guess I’m glad she knows that too, but her second sentence doesn’t help much either: “I am running for the United States Senate because…” Again, we already know that. She uses the passive voice in all four of her first four sentences. Is anyone still awake after that? 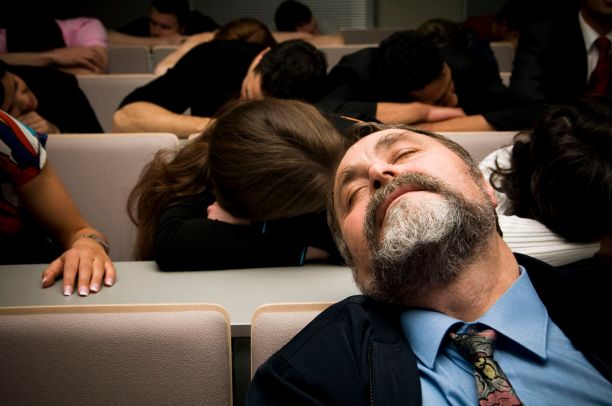 Then she states: “As a lifelong prosecutor…” like she routinely convicted drug kingpins at recess back when she was in Elementary school. Blah blah blah. Why are people voting for this woman? Is she hot? In her picture, she looks like she might be hot. If she thinks she’s hot, that would explain a lot. That would explain the “My name is Kamala Harris.” Maybe Kamala thinks she can win the election with her picture and name recognition. 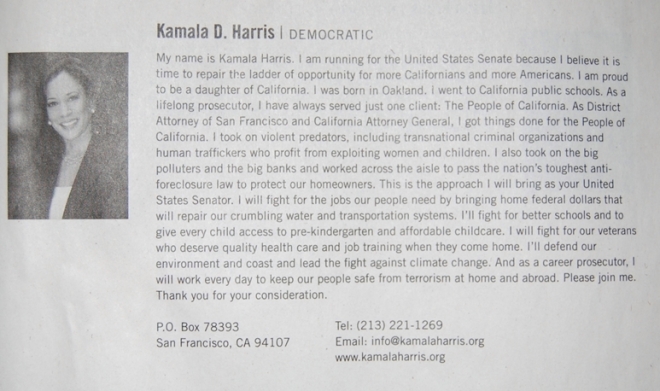 Personally, I think Loretta Sanchez looks pretty hot in her picture too, in that cheerleader kind of way, 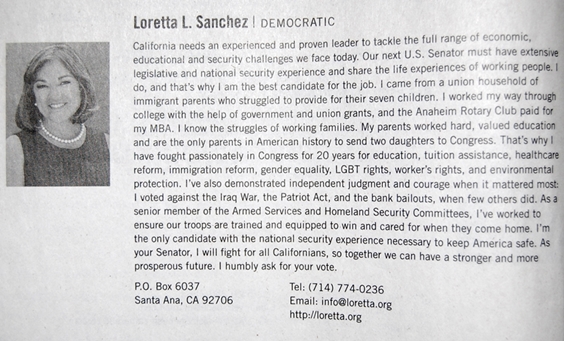 …and she’s got something that Kamala Harris can’t even buy, apparently, and that is “voice.”