This is NOT a Bomb Either

I’ve written before, about how few Americans are capable of making anything for themselves anymore, but the story of MacArthur High School freshman Ahmed Mohamed, who was detained at school, and eventually arrested, because he brought the digital clock he built from a kit, to school, blew my mind. First, it blew my mind that there’s still a 9th grader out there who would rather build an electronic kit than slaughter virtual aliens while driving recklessly through cyberspace.

Second, it blows my mind that teachers were alarmed, rather than delighted by this. A decent science teacher would have asked Ahmed how he built his clock, and how it works, and then ask him if he’d be willing to put the clock on the wall, where they would use it to tell time for the rest of the semester. You never know, another kid might find himself staring at that clock, counting down the minutes till the end of class, and think:”I wonder if I could build a clock like that.” At worst, it sells educational electronic kits, at best, it launches technical careers.

Finally, it blows my mind the most to imagine the cognitive dissonance between Ahmed who saw an electronic kit and thought, “That looks cool! I want to build that clock”, and teachers and cops who thought, “Why would anyone want to build a clock? Why doesn’t he just look at his phone if he wants to know what time it is?” Clearly the defeat of human creativity is complete. We have become such passive, conformist consumers that we now consider building your own clock a form of dangerously deviant behavior. It’s a brave new world.

I’m sure the entire experience traumatized Ahmed in ways that even a trip to the White House and a personal visit with President Obama won’t entirely erase. The kid likes circuit-boards, but now he thinks that he is freakishly weird for liking circuit-boards. This will become a defining moment of his life, and he will probably always feel self-conscious and nervous about how people might react to him, a Middle-Eastern man, buying electronic components, for instance. His innocence is lost. 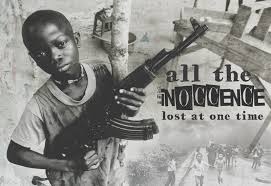 I sympathize. I loved circuit-boards as a kid, and I still do. I loved taking radios apart, and I assembled a few electronic kits, but not many of my projects from that era ever worked as well as Ahmed’s clock. As a kid, I didn’t quite get the hang of soldering electronic components. 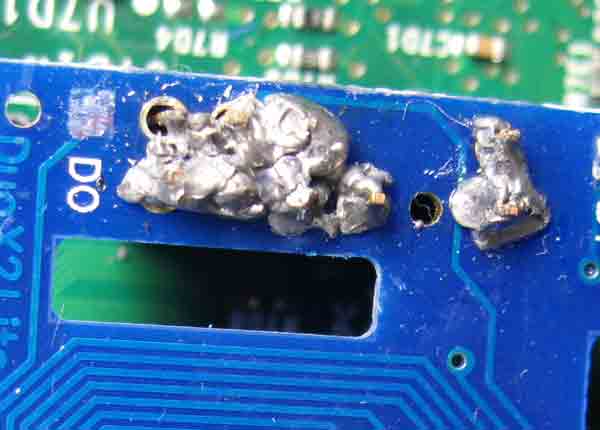 In the past decade, however, I have rediscovered my inner nerd, mastered my soldering technique and built myself a small collection of electronic musical instruments and audio gear, including a Theremin, a suitcase full of circuit-bent toys, an all tube guitar amplifier, and a stereo tube pre-amp. This past Summer. I built my most ambitious project yet:

WARNING: This is going to get nerdy!

This is a highly idiosyncratic, if not completely original, modular, analog synthesizer of my own design. I call it, The Geosafari Synthesizer because I mounted all of the circuitry inside the plastic housing of Geosafari, an electronic, educational game popular in the eighties.

I found this Geosafari game at our local thrift store and bought it for $1, In it, I saw the perfect housing for my synthesizer. I recycled the rectangular red and green LEDs from the game, and remounted them in the original holes. On the left, the LEDS display the clock speed, and step number of the sequencer. On the right Red LEDs indicate “power on” to each of three primary oscillators, and one noise generator, and a green LED indicates decay time of the envelope generator.

The circuitry fits into the space originally occupied by the Geosafari game cards.

I was also able to utilize the battery compartment, for battery, and extra patch-cord storage, and the built in speaker still works too. I even recycled a transistor and a capacitor from the original Geosafari circuit-board. Other than that, I completely replaced the guts of this Geosafari game.

Here’s what went inside, to replace the original electronics: Two “Atari Punk Consoles” this famous circuit originally devised by Forrest Mimms, has a lot of musical potential, and two of them together more than doubles the fun. With a flip of a switch, they can be heterodyned. Heterodyned oscillators effect each other in interesting ways that can’t be recreated by mixing them through an audio mixer.

Beneath them, I included a white noise generator. I got the white noise gen schematic from an old website that suggested we build these devices to prevent malignant forces from using low-frequency radio waves to reprogram our brains. If it does that too, I’ll consider it a bonus. Rounding out the signal generating circuits, I included a simple 555 based, audio frequency oscillator, just to have one very straightforward oscillator without the built-in frequency divider.

In the middle section of the control panel, you’ll find all of the signal modifiers, starting at the top with a voltage controlled filter. I built the filter from a schematic I found online. The filter is a critical section of any analog synthesizer, and I like the way this 741 based filter sounds. This was the first resonant filter amplifier circuit I’ve ever built, and I chose this schematic for it’s simplicity, and easy availability of parts. It does what a filter is supposed to do.

Beneath the filter, I have a simple, one-stage envelope generator. I had planned to skip the envelope generator, because a standard four-stage ADSR envelope was just too complicated. Then I found this nifty little circuit from the folks at GetLo-Fi.com. How could I resist adding this simple one-stage decay envelope to my synth. It only took three transistors and a capacitor, all of which I had on hand, so I built it on the edge of the filter circuit board, and added the controls to the control panel.

Beneath the envelope generator, I included a Low-Frequency Oscillator, to add modulation to the filter, the amplifier, or any of the oscillators. I got the Low-Frequency Oscillator circuit from a youtube video. The guy was using this particular circuit to make an LED gradually light-up, then gradually fade out, and repeat the process at a steady rate, that you could increase or decrease by turning a knob. He used the circuit to add lights to his X-wing fighter, Millennium Falcon, and USS Enterprise scale models. I attached the LEDs to photoresistors, with shrink tubing, and used the same circuit to control the oscillators and filter on this synthesizer.

Below the LFO, a simple Voltage Controlled Amplifier allows me to modulate the volume of the signal with the LFO. In the future, I hope to add some accessories to this synthesizer, like a keyboard, and a light-sensitive gestural controller, which I could also use to control volume, through the VCA.

Consuming the entire left third of the control panel, a ten-step voltage controlled sequencer allows me to cycle any of the on-board oscillators, or any voltage-controlled analog synthesizer, through a musical pattern of up to ten steps. I can change the speed of the pattern, the frequency range of the pattern, and the number of steps in the pattern from 2-10. The two columns of five knobs at the far left allow me to change the pitch of each individual step. 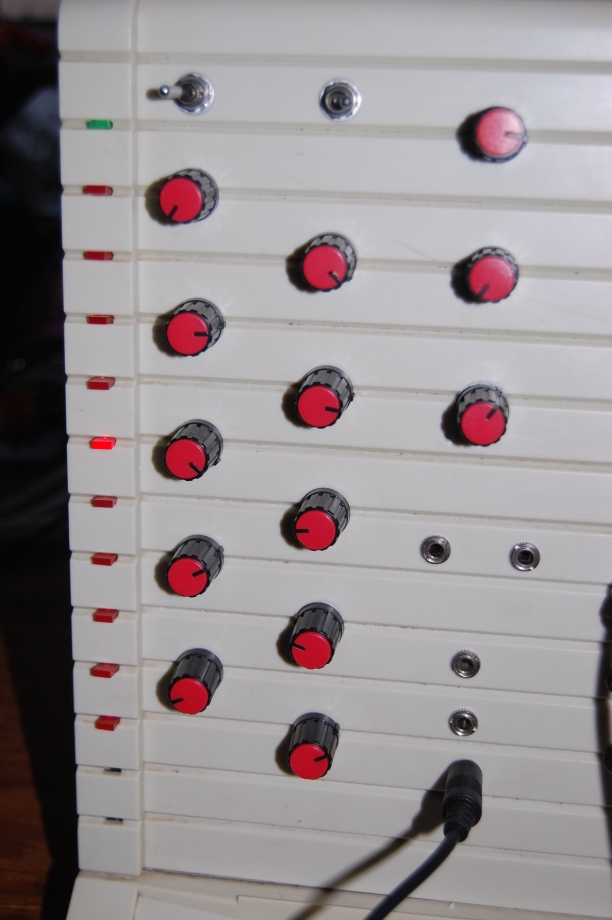 I found a youtube video that showed me how to convert a commonly available, and very inexpensive electronic kit, the Velleman brand LED chase-light kit into a pretty cool sequencer, so I decided to build one myself. As it turned out, not all inexpensive electronic chase-light kits are created equal. Mine turned out to be a different kit altogether, but with a little research, I was able to figure our how to make it into a working sequencer as well. 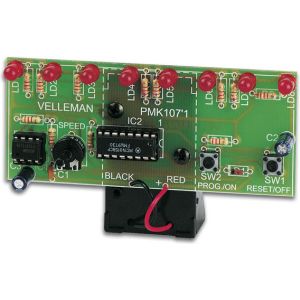 How does it sound? Take a listen! In this video I took it for a test flight.

By next spring, you might hear it in some new music.