Well Tomorrow is Election Day. Win or lose, this will be the last time I write about Measure Z. Believe me, I’m as sick of it as you are. I cannot think of a single topic more boring than tax policy, or an activity more pointless than voting, but this blog remains the highest ranked Vote No on Measure Z page on the internet, so I have a job to do.

We’ve dropped a few places since I first reported this phenomena, but lygsbtd remains the only Vote No On Measure Z web site to show up on the first page of search results. However, if you do a google image search, you’ll discover that my Vote No on Measure Z memes dominate the image search results, with seven of the top ten images sourcing from this blog. In the image war, I am kicking their ass!

Unfortunately, this battle won’t be decided by a google image search. This battle will be won at the ballot box, so here I go again, trying to find an entertaining way to motivate you to go to the polls and VOTE NO ON MEASURE Z. 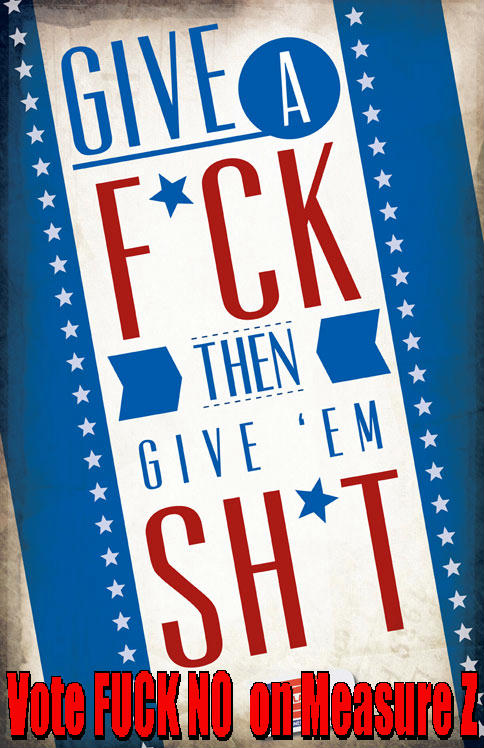 I don’t like telling you to vote. Usually I tell people that voting is for suckers, because voting is for suckers. It takes a special kind of stupidity to believe in democracy. Think about it. How many years did you stay up all night on Christmas Eve, before you realized that Santa Claus was a fraud? Now ask yourself: How long has it been since you’ve seen democracy actually solve a problem or prevent an expensive, pointless war? We have a word for that kind of stupidity. We call that kind of stupidity: “religion.”

Democracy is just the latest fraud religion. Like all fraud religions, it was concocted as a means of extracting money from your pocket, and putting it in someone else’. That’s exactly what Measure Z is all about. Humboldt’s greediest bloodsuckers are counting on Humboldt’s dumbest morons to help them pry more money out of your pocket. 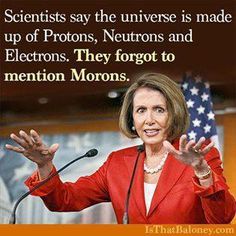 They know that ALL of the greedy bloodsuckers in Humboldt County will vote for their regressive tax measure, because greedy bloodsuckers love to take advantage of people. Even the Libertarians around here (I’m looking at you Fred) can’t say NO to screwing poor people. So, they’ve got the bloodsucker vote wrapped up. 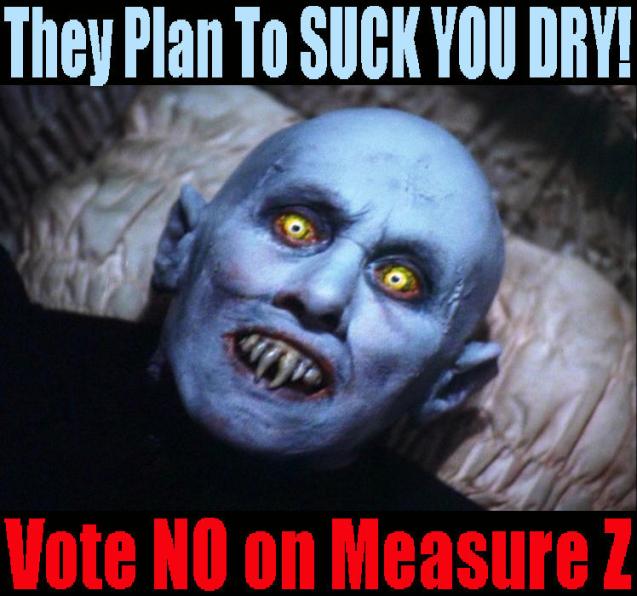 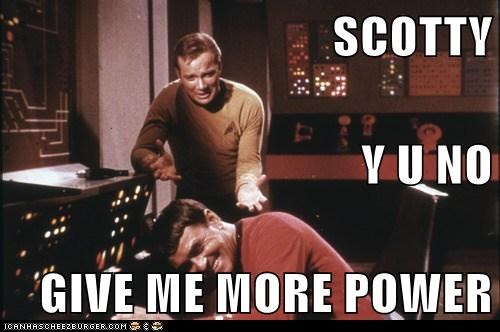 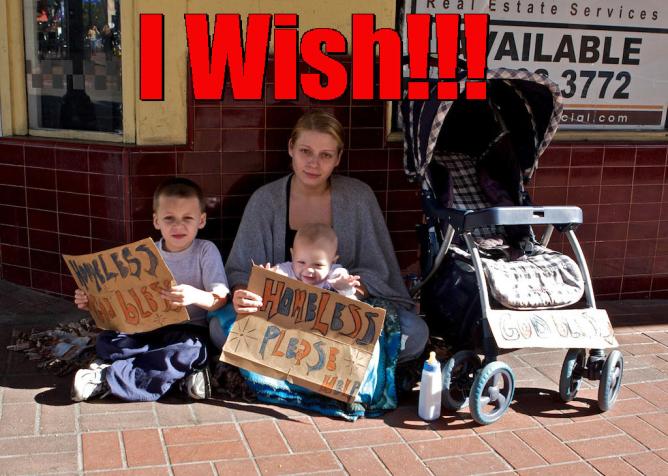 I’ve got news for you. Government is never going to do any of that stuff. In reality, democracy empowers bloodsuckers to rape the Earth, pollute the environment and take advantage of people, and democracy prevents the rest of us from interfering with it. That’s what democracy does now, and that’s what democracy has always done, but liberals and progressives look back at democracy’s almost 250 year history in the US, and they say, “It still looks good on paper. It really should work this time.”

No, it won’t work, not this time, not next time, not ever. Democracy will never work. Jesus is not coming back, and Santa Claus does not exist. I’m sorry to disappoint you, if I’m the one to break it to you, but professional wrestling is phony too. These are just the facts of life.

Still, these three great frauds, democracy, Christianity and consumerism continue to define our culture, and sometimes it’s just easier to just say “Merry Christmas” than to yell, “Santa is dead!” When someone says “bless you” after you sneeze, it’s not always helpful to say “Fuck you! Your religion is a fraud and you are an idiot!” By the same token, you can hold your nose, go to your polling place, and cast your ballot to stop this whole evil system from stealing even more of your life, even though you know the system is a complete fraud.

Go ahead. Get it over with. Vote NO on Measure Z. 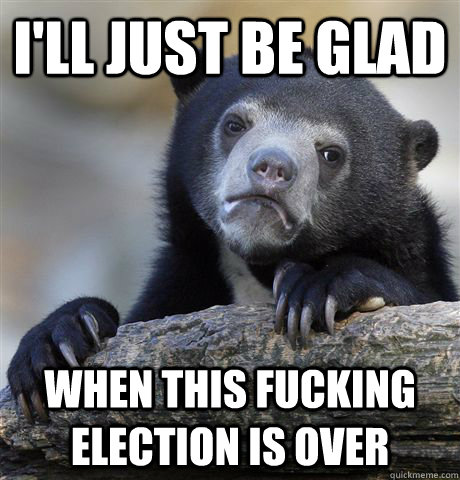 Thus far, I haven’t said anything about this upcoming presidential election, and frankly, I don’t see much point, …of the election, or of commenting about it. I did actually cast a ballot, primarily to honor the hard work of grassroots organizers who put Prop. 37 on the ballot. I think that one deserves to pass, so I voted for it.

As far as the presidential race goes, I cast my vote for Roseanne Barre, not that I think she has a chance, or that she would do any good even if she somehow managed to win. I voted for Roseanne because she’s funny. Funny counts in my book! Don’t tell me about your leadership, your grand plan, your first 100 days or any of that BS. If you expect me to listen to you, you’d better make it funny.

If you can make it funny, I don’t even care if you lie to me, just don’t expect me believe you when you tell me that a strong third party, or anything else for that matter, will save democracy, and turn this country around. Not Jill Stein, not Rocky Anderson, not Roseanne Barre, no one is going to turn this country around. Putting a new captain on the Titanic will not help it change course. We’ve already hit the iceberg, and this nation is headed straight for the bottom of the ocean.

The longer we pretend that we can solve real problems with elections, the worse all of those problems become. Most of the real problems we face as a nation, stem from, and would not exist without, the centralized national government. We wouldn’t have a massive military, which would severely limit the expansion of global capital which would in turn, reign in environmental degradation, inequality, homelessness and poverty. Our nation exists to create, maintain and exacerbate those problems, and to prevent anyone from taking effective action to stop them. So, stop pretending that we can turn this killing machine into something good, just by casting a ballot.

Of course, it might take a while to hit bottom, mainly because so many people continue to invest in “the system”. I have a hard time respecting anyone born after WWII who invests in “the system”. We grew up knowing about DDT and Silent Spring. We saw photographs of the Earth from space. We saw the “Crying Indian Commercial”.

We remember Vietnam, the King/X/Kennedy assassinations, Wounded Knee, Kent State and Watergate. We dropped acid. We heard Timothy Leary tell us to “turn on, tune in, and drop out” and for a brief moment, we understood what he meant, and knew he was right.

All of that happened before we turned 21, and most of it happened before we were 12. Today, no one in the entire work force, from the President of the U.S. on down, has any excuse for believing in the system. We knew about the corruption, lies and propaganda. We knew it killed innocent people indiscriminately, and we saw how it treated the planet. We knew. We knew what we were getting into. We didn’t know better, I’ll grant you that, but we knew. We knew that what we knew, was rotten to the core.

Anyone of average intelligence or above should have put two and two together by the time they reached the age that they started making their own decisions. If you were too dimwitted, to figure it out, or too deep in denial to face it, you have a pitiable brain dysfunction. These feeble-minded people are not really capable of making decisions for themselves, let alone the rest of us.

Others however, saw the corruption, the oppression, the violence and the destruction, held their nose, and dove in, feeding the system with their efforts, talent and time. They indulge themselves in consumer goods, and fill their lives with shiny hi-tech distractions. These people suck! 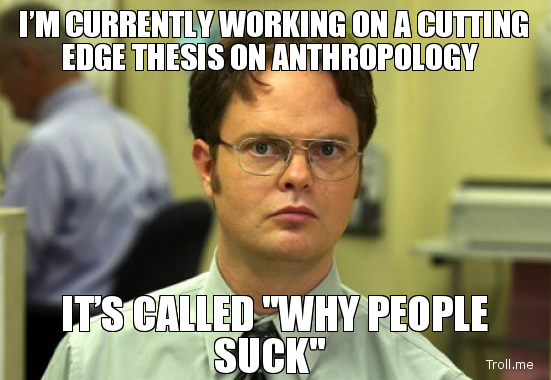 It’s these people, these cynical cowards who know that “the system” is killing the planet, but hope it lasts long enough to indulge their pathetic middle-class expectations, who pretend that voting matters. They make-believe that things will get better if they just vote for the right person. Then, they get right back to work building attack helicopters, mining uranium, or selling us crap we don’t need. Speaking of crap we don’t need, lets add democracy, the federal government, and the cynical cowards who still pretend that democracy might work someday, to the list.