On The Money; What Middle-Class? 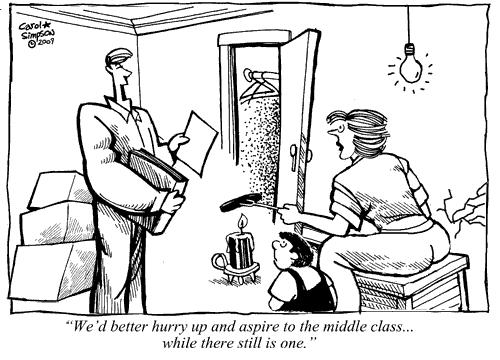 If you took a drink every time you heard a politician say “middle-class”, you could have stayed smashed since last January. Isn’t it strange that here in the US, where “Marxism” “communism” or even “socialism” have become foul language, the Marxist concept of an expanding middle-class remains hugely popular. So much so, that every politician in America constantly promises to help grow the middle-class.

For a while in the US, we had a real middle-class. Strong labor unions organized workers and wages rose for workers as a result. Thanks to unions like the Teamsters, the AFL-CIO and the UAW, working people enjoyed home-ownership and considerable creature comforts. This was the age of Levittown houses and populux consumerism, and a brand new vision of widespread middle-class affluence that came to be known as the American Dream. 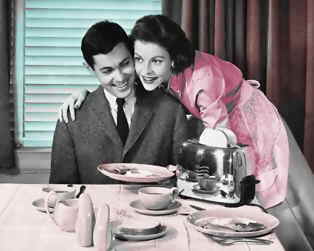 Just like Marx predicted, workers organized, took control of the means of production, demanded higher wages, and the middle-class was born. And, for a while, it persisted, until capitalists found plenty of cheap, unorganized labor in China. Today, that middle-class has mostly retired. Thirty years of union-busting, outsourcing, downsizing, and wage stagnation have exacted a huge toll on the middle-class. In fact, you’d hardly recognize it today.

Today, instead of an economy based on manufacturing, we have a service based economy brimming with low-wage, high-stress customer-service jobs. Facing lower wages (the “new normal”), higher housing, food, energy and health-care costs, the standard of living for most American workers has plunged precipitously in the last twenty years. Strangely, we still think of ourselves as middle-class.

Hey, our parents were middle-class, doesn’t that automatically make us middle-class too? Like it was genetic or something, but no, you are not middle-class anymore. The fact that you have three roommates helping to pay the rent should clue you in to that. The middle-class has vanished. 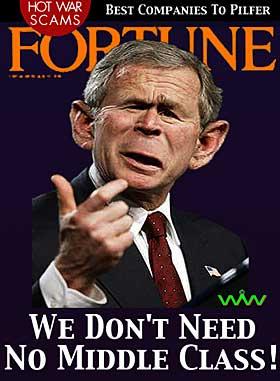 In the crater left by the imploding middle-class, we find the bourgeois. That is, the landlords, lawyers, cops, and businessmen, the people who most directly serve, and emulate the super-rich, the ones who already had money before the middle-class was born. These people are happy to be rid of the riffraff, and glad to have a whole new underclass of people to exploit.

That’s why you hear politicians talk so much about “the middle-class”. They know that the term only really applies to retirees from that bygone era, and their bourgeois, landlord/cop/lawyer/businessman supporters whose asses they already kiss. They know that a lot of people, who do not own property, or stocks, or investment income, but instead work for a living, at low wages, still identify with the middle-class, even though they got kicked out of the club decades ago.

When politicians promise to help the middle-class, they don’t mean that they will help you become middle-class. They mean that they will hold you down so the bourgeois can fuck you over. If you don’t like this old French term, call them the gentry, or the property owning class, or better yet, the landlords. Would you vote for a candidate who promised to help landlords? How about a candidate who promised to punish landlords? Now we’re talking, am I right?

We have good reason to despise landlords, as we do cops, lawyers prisons and politicians, and they have all earned our contempt. Don’t dress them up in picket-fence-leave-it-to-beaver imagery, and then pretend like you live there too. The middle-class, Marxism, and the Berlin Wall all crumbled to dust a long time ago. It’s time to face facts, and call a spade a spade. The middle-class is dead, or at least retired, and the bourgeois are not on your side, and the politicians who promise to help them are not your friends. There’s a view of the middle-class that’s On The money.