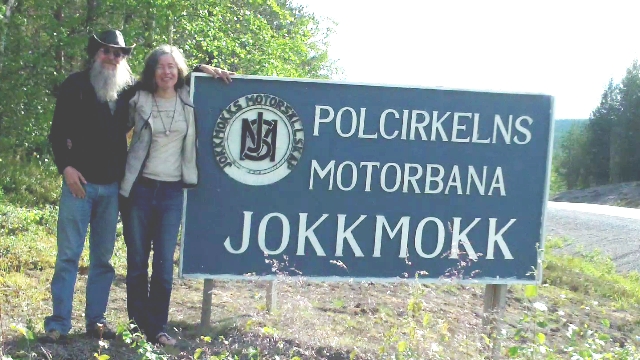 We’ve entered the Land of the Midnight Sun. A week ago we drove “Matilda” our ‘98 Mercedes E240 station wagon onto a ferry in Sassniz, on Germany’s Baltic Coast, and set sail for Trelleborg, Sweden. From there we headed North. We took a couple of days to explore Sweden’s “Vildmarksvägen” or “Wildernesss Road” which took us through miles of Taiga Forest, enormous fields of lupines and other wildflowers and the high plateau of Stekenjokk, a rocky stretch of tundra where we we found patches of snow on the ground in the middle of July.

We also saw vast devastation in the form of clearcuts, miles of even aged toothpick tree-farms and huge log decks stacked to the sky with logs barely bigger than tepee poles. We encountered a moose, many birds we had never seen before, and the most ferocious mosquitoes we have ever endured. The weather has been pleasantly cool, breezy and partly cloudy, and the sun hasn’t set in days.

From the Wilderness Road, we continued North, and here in the town on Jokkmokk, we crossed the Arctic Circle. For the first time in six weeks, we checked into a hotel, to escape the mosquitoes and the sunlight that just won’t go away. All the travel websites warned us to be prepared for high prices in Scandinavia, but compared to Humboldt County, Northern Sweden seems like a bargain. For the same price of a depressingly mediocre room in a Northern CA hotel, we got a very nice suite here at Hotel Jokkmokk, and the prices at grocery stores are certainly no worse than Humboldt County.

Swedes are very charming, and they all speak English pretty well.

Artist bio: The writer in me says: “Don’t tell them who you are, show them what you do.” The artist in me says: “It must be strong, simple, bold, yet rich with detail, but above all, original.” The filmmaker in me says: “We need to contextualize your work by weaving the roots of the Psychedelic Revolution, the Environmental Movement, Gaia Theory, Future Primitivism and musical influences from Iannis Xenakis to Bart Hopkin into a narrative that portrays an iconoclast's struggle for cultural relevance from the forested hinterlands of rural Northern California within the greater post-industrial, post-post-modern, post-reality mind-fuck of the 21st Century.” The critic in me says: “Will that guy ever shut up?” The comedian in me says: “It has to make me laugh at least once.” The engineer in me says: “Don’t forget to tell them that you do it all off-grid, with solar power, using recycled materials.” And the improvisational musician in me says: “Cut! Great job everybody!” View all posts by john hardin

Listen to my music @ EEM

Support This Blog at the New lygsbtd Store

If you haven't read john hardin's blog before, prepare to be shocked. I always am. (I can't help but enjoy it though...at least when I'm not slapping my hands on my computer desk and yelling at him.) He's sort of a local Jon Stewart only his writing hurts more because it is so close to people and places I love. Kym Kemp
...about, On The Money, The Collapsing Middle Class ... I think he really nails it, the middle class is devolving back into the working class. Pretty brilliant, IMO. Juliet Buck, Vermont Commons http://www.vtcommons.org/blog/middle-class-or-first-world-subsistence
BLOGS WE WATCH: John Hardin’s humorous, inappropriate, and sometimes antisocial SoHum blog is a one-of-a-kind feast or famine breadline banquet telling it like it is—or at least how it is through Mr. Hardin’s uniquely original point of view with some off-the-wall poetic licensing and colorful pics tossed in for good measure. For example, how it all went from this to that and how it all came about like the hokey pokey with your right foot out. You get the idea. Caution: this isn’t for everybody, especially those without a bawdy, bawdry, and tacky sense of humor. You know who you are. We liked it. (From the Humboldt Sentinel http://humboldtsentinel.com/2011/12/16/weekly-roundup-for-december-16-2011/)
Loading Comments...
%d bloggers like this: