This vein is just too rich to ignore, so today I’m mining the irony of the whole sad situation in Garberville yet again. I realize that this situation has upset many people, and I think people should be upset. In fact, people should be outraged, just not at the poor, the young and the homeless. Instead, I think we should blame it on the Baby Boomers. 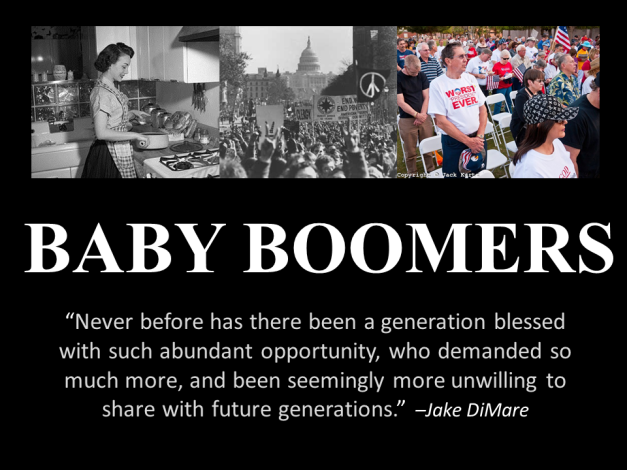 Never before have so many taken so much, and yet demanded so much more as the Baby Boomer generation, and it couldn’t be truer here in SoHum. Here in SoHum, a small community of Baby Boomers bought land here dirt cheap, and took advantage of the Drug War to turn enormous profits growing black-market marijuana. Today a small community of Baby Boomers still control most of the real estate in SoHum, and they make damn sure that no one ever gets a deal like they got. They supply half of the nation with marijuana, which turns people into hippies, but the money they got for it, turned them into yuppies. Now that they have become crotchety old geezers, what do we hear them complain about? 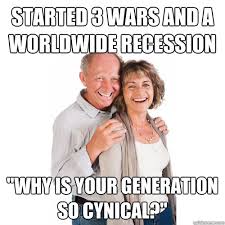 Hippies! The Baby Boomers in Garberville are complaining about hippies!

You know what folks, what goes around, comes around, and sometimes the karma runs over the dogma. You might not be old enough to remember this, but there was a time when there were even more scuzzy, smelly, obnoxious hippies around than there are today.

Back in the late 60’s and early 70’s, you wouldn’t believe how many filthy, dirty fucked-up hippies there were. They were everywhere. They took every imaginable drug, meth, heroin, cocaine, LSD, PCP, Quaaludes and anything else they could get their hands on.

They freaked-out spectacularly. They fucked-up catastrophically, and they passed-out in their own vomit. Not only were they totally “in your face” everywhere you went, they had to have their loud music blaring all the time as accompaniment.

And talk about attitude. They treated the whole world as if it belonged to them, exclusively, right from the start. They rioted, for God’s sake, big raucous riots where they turned over police cars and set fire to buildings. They’d never shut-up and sit down at music concerts, and they’d never turn their music down anywhere else. They wore faded, ripped, shabby clothing and they never took a bath. They were disgusting, repulsive, and obnoxious, and they took over every park, square and sidewalk in the whole country.

To be fair, the boomers did change our culture. They changed us from a culture of stilted, stiff, sexually repressed, uptight consumerism into a culture of dumbed-down, hyper-sexualized, casual, convenient consumerism. Spirituality replaced religion. Positivity replaced compassion, and self-serving non-profit organizations replaced charities.

The War on Poverty became the War on Drugs because suddenly Americans hated hippies more than they feared black people. With cocaine, they turned a rich man’s drug into a poor mans drug and annihilated a generation of inner-city youth. With marijuana, they turned a poor man’s drug into a luxury only the rich could afford, and they made income discrimination more socially acceptable than racial discrimination.

One thing hasn’t changed however, Baby Boomers thought they owned the whole world then, and they still think the whole fucking world belongs to them. Now that they’re all shriveled-up, they don’t think anyone else deserves the opportunity to be young and irresponsible, and no one else has the right to come here and make a home in the woods without giving them a quarter-of-a-million dollars first. I guess they’ve still got some lessons to learn because it’s their bad karma that keeps bringing more hippies to Garberville, and I don’t think anyone deserves them more.