Happy Halloween to The Groovie Goolies

Happy Halloween to “The Groovie Goolies”

It seems to me that the entire Groovie Goolies cartoon series was made from about 25 or so animated clips, most of them contained in these videos. Imagine a cross between Rowan and Martin’s Laugh-in and The Munsters and you have some idea of what The Groovie Goolies were all about.

They had a joke wall.

They had musical acts.

The monsters had a band, 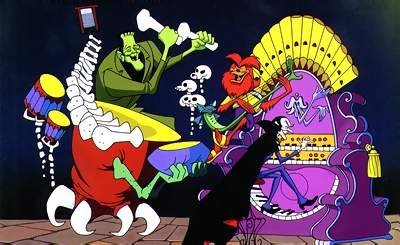 and some haunted furniture had a band,

but neither of them could lip-sync worth a damn. They told jokes. Sometimes someone would get a bucket of water dumped on them from off stage.

The Groovie Goolies started as a spin off of Sabrina the Teenage Witch, itself a spin-off of the Archies, another band with terrible lip-syncing ability.

While the Archies and Sabrina the Teenage Witch live on even today, the Groovie Goolies lasted only one 17 episode season, from 1971-72.

I never liked the Archies or Sabrina the Teenage Witch, but at 9 years old, I really liked haunted houses. I watched the Groovie Goolies for ideas that I could use in the “haunted dungeon” I created in the basement of my childhood family home.

The Groovie Goolies took place at Horrible Hall, a haunted castle owned by “Drac”, a gay vampire with false teeth, who was also Sabrina’s uncle. 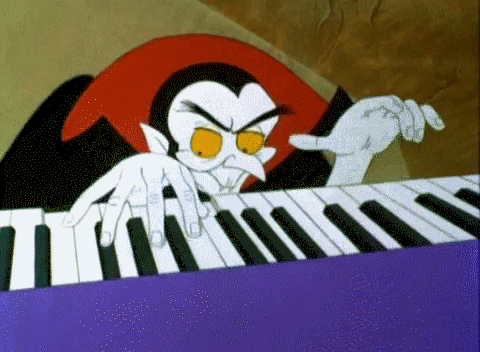 “Drac” shared his home with his boy-toy “Frankie” a somewhat dim, but hunky Frankenstein monster.

“Wolfie”, a wolfman, was their dealer. He’d come by to sell drugs and stick around for the party. “Wolfie” was clearly the coolest member of the cast, in his board shorts and Birkenstocks.

. He surfed, played a cool-looking guitar

and drove a bitchin’ car.

He remains a role model for me to this day

including that hottie Sabrina.

Other assorted freaks dropped by from time to time.

While it is a shame that the show didn’t last, I’m sure things went downhill for them personally, before long. Drac and Frankie probably died of AIDS in the ’80s. Wolfie did a ten year mandatory minimum sentence for possession with intent to sell. Horrible Hall, already condemned in 1971, was eventually demolished and replaced with an Chi-Chis Mexican restaurant, that has since gone out of business.